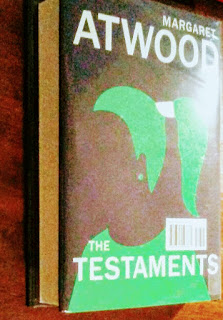 I had disturbing dreams while reading The Testaments, but I also had disturbing dreams while recently watching the Netflix documentary series The Family. And of course, it's the Trump era... A completely crazy, corrupt Gilead style of life feels much more possible now than any other time before. At least in my lifetime. (The end of The Family is connected to the Trump era and brings to mind every dystopian novel and short story I've ever read.)

I read The Handmaid's Tale for the first time when I was in seventh grade. One of my teachers saw me with the book and said, "That's a scary book, kiddo." I didn't say anything, but I decided if she brought it up again (she didn't), I would tell her my mom gave it to me. (Which was true.)

I remember that in seventh grade I also read The Thorn Birds (don't judge me, I was thirteen), and the autobiography of Bill T. Jones called Last Night on Earth. I cried so much during the section about Arnie Zane's death. Luckily, I was at home when I read that part so I didn't sob in public. This is the cover of Last Night on Earth: 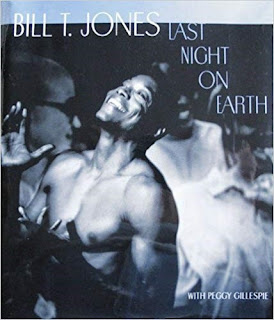 In seventh grade we had a free reading period. The guy who sat next to me (who I ended up dating part of my junior year of high school) said to me, "You're only reading that because he has his shirt off." I looked at him, probably smugly, and said "He's gay." He looked shocked and said nothing to me for the rest of the day.

Anyway... Next up I'm going to read Bully Love by Patricia Colleen Murphy. I really like her writing and I really like Press 53 so I'm really curious about it. Also on my reading list is Lara Vapnyar's Divide Me By Zero, Sonny Brewer's A Sound Like Thunder, and Mary Biddinger's Partial Genius.
Posted by Meg Johnson at 3:34 PM