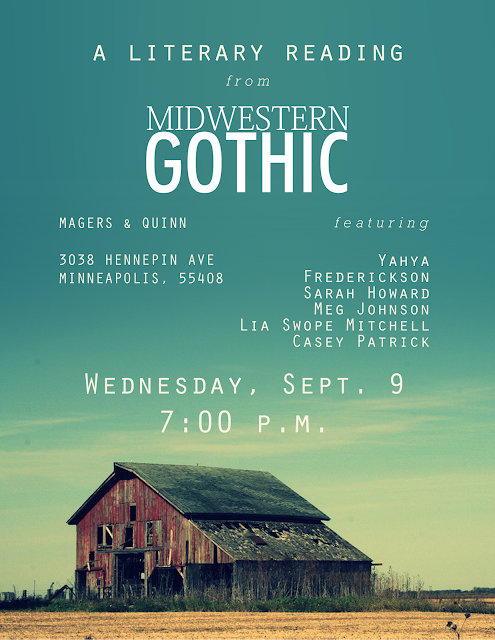 I'm excited to share that I will be the guest judge for the 2016 Vignette Collection Award for Vine Leaves Press. Submissions are open now! You can read the guidelines here.

Also, I would like to say thank you to Jennifer L. Knox, Carol Guess, and Danielle Pafunda for writing blurbs for my forthcoming book, The Crimes of Clara Turlington. They are all extremely busy and I so appreciate the time they spent with the manuscript and crafting blurbs.

“Meg Johnson's new book is a furry pink pillow full of blood and teeth. Slyly brilliant, funny, and scary all at the same time, its effect can only be achieved through a careful attention to craft and unwavering clarity. Her psychological portraits of women and our subconsciouses—of our indefatigable rage and imagination—of our struggle for power and independence—had me laughing and gasping at the same time.” Jennifer L. Knox

“At once fierce and fragile, the heroines of Meg Johnson’s vignettes invite readers to peer through keyholes and riffle pages. Secrets stain characters’ careful lives, lending mystery to lyrical poetic fragments. In precise, musical language, Johnson invites us to study the stories behind quotidian thoughts and feelings. The Crimes of Clara Turlington reads like a thought police blotter: every nuanced emotion called in and cuffed.” Carol Guess

"Clara Turlington's [Meg Johnson's] girl gang teaches you how to make yourself unavailable, even when your body remains in the room. These girls know how to get things done. They attract the gaze and pin it to the ugly consequences of its greed. They're so visible as to be invisible. They laugh until we get the joke. They need naps and dirt naps. They make an uneasy alliance with other creatures who can anticipate a blow--horses, small children, some of us--and when they're lucky, feint." Danielle Pafunda

I was asked to write a post for a site about the "undercover soundtrack" (meaning the songs that I was listening to during the period of time I wrote the manuscript) for The Crimes of Clara Turlington. I'll let you know when it's out. It has been really fun gathering together the songs. The mix of musicians (and genres and time periods) is really bizarre.

I have a couple new posts on MOGUL which you can read here and here.

I have some new writing projects I'm working on. My goal is to stay as productive as possible with these new projects when teaching starts again. Monday!
Posted by Meg Johnson at 2:54 AM

I was recently asked to be a contributor for the site MOGUL and I have two posts up today. You can see my contributor page here and the posts here and here.
Posted by Meg Johnson at 3:10 PM

New Poem in The Plot by Villainess Press, Poems Forthcoming in Bear Review

I got a little behind on blogging. This time of year has been busier than I originally anticipated.

On July 23rd I had two poems accepted by Bear Review. The issue is scheduled to be released in mid-September.

On July 27th I had a piece accepted by The Plot, an online literary journal by Villainess Press. On July 30th the piece was published. You can read it here.

I have something coming out in The Nervous Breakdown in the late fall. More on that later.

The Crimes of Clara Turlington comes out in December. I will post updates about 2016 readings when I have more details. I'll be giving readings in various cities and states. I know right now that there will be a few events in Ohio in February including one you can read about here. (Scroll down to 2016 readings.)

I haven't seen too many movies this summer, but I did recently watch What Ever Happened to Baby Jane?. It was scary in a good way. My favorite parts were when Jane (Bette Davis) would imitate Blanche (Joan Crawford).

Hard to believe it's already August...
Posted by Meg Johnson at 1:33 PM