Yes, I did get a bit behind on blogging! Between the end of the semester and the holidays and the new book out things were busy. I have two books out now! I don't think that had even hit me yet when I wrote my last blog post.

Stephen Burt recently tweeted about The Crimes of Clara Turlington! 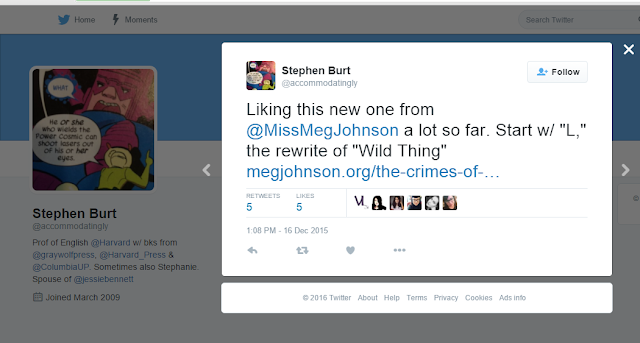 Later I found out that NewPages named The Crimes of Clara Turlington an Editor's Pick. Inappropriate Sleepover was a NewPages Editor's Pick shortly after it was released too!

There is a new article in the Iowa State Daily about the release of my new book which you can read here. Last spring the Daily wrote about the book after it had been accepted for publication. You can read that article here.

The second half of January I'll be in Minneapolis and Madison. In February I'll be teaching guest workshops in Ohio at Malone University and doing a reading at the Hub Art Factory. In March I'm going to New York and I'm reading in the series at Pete's Candy Store in Brooklyn. I have a reading in Iowa in April. I'm ready for an adventure.
Posted by Meg Johnson at 6:26 PM